These couple of weeks must be something special, because I adopted all three of the browns during this time of year. Wrigley's adoptaversary was yesterday, Probert's today, and Maizy's is in just a couple of weeks. So, I figured it was time to do some comparison photos. Then and now(ish - the now photos are from the past few months).

Probert was adopted 6 years ago at about 11 months old from a rescue in Columbus, OH called Measle's Animal Haven. He was a scrawny little pup who had been abused, rescued, and then contracted a mild case of parvo (mild due to being an older puppy) and been bitten by another dog in rescue. Now he's a little snugglebutt who still has issues from his past, but over just the past couple of years is really learning to be a DOG. Finally. 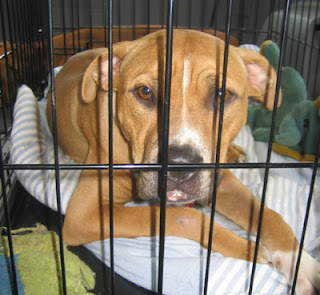 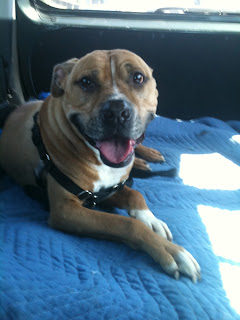 Wrigley was adopted 7 years ago at about 5 months old. He was a direct rescue from people who didn't want him. They said they were watching him for someone who went out of town and never returned to pick him up. Wrigley was living life underneath a trailer at the end of a tow chain and had never even been given a name. The people who had him did doxie rescue and had about 9 rescue dogs in their house, but never thought to bring Wrigley indoors because of his breed. To their credit, they did make some effort to rehome him and I was happy to invite him into my pack! Now he is a wiggly goofball. Definitely the most challenging of my dogs due to his guard barking, but he makes up for it by being one of the most genuinely sweet souls I've ever encountered. 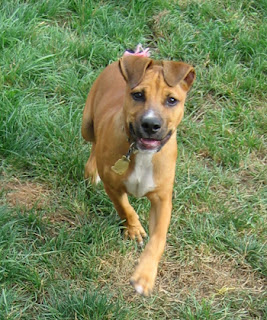 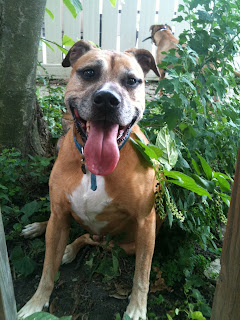 Maizy was adopted 8 years ago at about 9 months old. She was a scrawny 27 lbs and smelled like mildew, probably due to the workers at Philadelphia Animal Care and Control hosing out her kennel with her still in it. She was shy and sometimes stubborn, but always a wonderful, personable dog. She grew up quickly, gaining tens of pounds in just a few months after her adoption. She is my most faithful companion and is definitely the pack leader. I have been so fortunate to have her to teach the boys the ins and outs of being a dog, as I see they have often studied her behavior and followed her example. 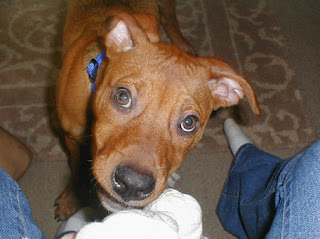 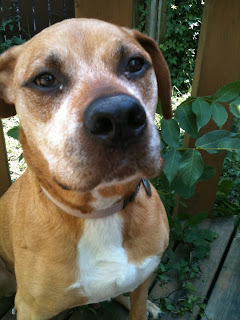 So, there it is. Happy Adoptaversaries to all of my babies. My life would simply NOT be the same without you. I love you all so so much.
Posted by Nicole at 11:58 PM 13 comments:

Probert, the million-dollar dog, struck again last week when he broke his second canine tooth. While the first one, broken just before his knee surgery, was broken pretty mildly, this one was broken vertically reaching up into the gum (ouch!). So, a dental was scheduled (and then pushed up as his gum started to turn color). When I dropped him off, the vet was not happy with him for having broken such a difficult-to-extract tooth. In the end, they were able to save his one canine, but the other one had to come out. Let me tell you, the root on that thing was HUGE.

So, he had surgery and was doing pretty well on his intense regimen of pain killers and antibiotics. Until!!! His stitches came out and the giant hole in his jaw from the root removal was exposed!! The vet said at that point it would either heal up on its own, or his body would create a mouth/nose fistula that would require specialty surgery to repair. Fortunately, at his follow up visit a week later, the gum had grown back together and he is in the clear. Hopefully, we can avoid vet visits for him for a while!

In super cute news, when I was picking him up from the vet after his procedure, he was super groggy and walked right into a glass door. Poor guy! He's doing much much better now, though. Stay healthy, please, Little Guy. 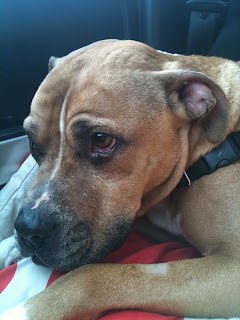 Posted by Nicole at 9:27 AM No comments: 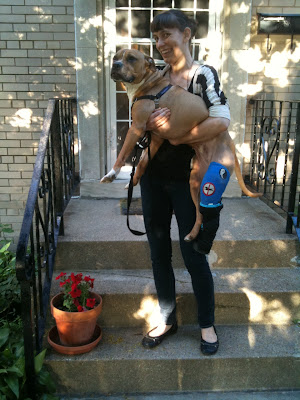 Probert had knee surgery a few weeks ago to repair a torn ACL. He actually tore it a few months ago while racing around the yard in jubilation for getting to go for a car ride. Where were we headed? To the vet's new office's grand opening party, of course. She had to take a break from the party to diagnose his injury and prescribe pain medication. So embarrassing. Probert waited a while to have surgery as I was traveling pretty extensively and needed to be home for his rehab (and because the vet said he would be fine to wait). So, a couple of weeks ago, it was done. We went to a different doctor than for Wrigley's surgery a couple of years ago and I was so happy with his care. They gave him a cute cast and even sent him home with a little shoe for going outside. He's off stairs for 6 weeks, so I've been doing a lot of dog-carrying. Here's a photo of he and I. His cast was on for a week and staples came out after two weeks. It's been another two weeks and now there's only two left until he's given the all-clear to return to normal activity. Can't wait!
Posted by Nicole at 7:49 PM No comments:

About a month ago we brought a new couch (it had previously occupied our office at work, but didn't work in our new building) home. I was really excited, but Hannibal the cat was REALLY angry about the new couch when it was first moved in. She was hissing and running and generally acting pretty nutty. In an effort to calm her down, I went to pick her up to put her in a bedroom for a while and she freaked! She ended up biting my hand, which ended up getting infected, which ended up requiring TWO emergency room visits. The first visit resulted in a tetanus shot (OW!) and a prescription for big-ass antibiotic pills. The second visit resulted the following day from a HUGELY swollen hand that required IV antibiotics. At that visit I learned that it takes about 30 minutes to receive a course of IV antibiotics, which was very fortunate since we were having a party that evening with 20+ of our friends due over.
So, the moral of this story is don't get bit by a cat! My 3 pit bull dogs and 1 shep have never come close to causing a hospital visit!
Posted by Nicole at 9:45 PM 4 comments:

I have been extremely neglectful about posting! Probert turned 6 on Halloween and everyone else is doing great! Here's a picture of Probert in his new crate that Dan magically found in the garbage on the exact same day that I was going to buy Probert a new crate! Look how much he loves it! :) 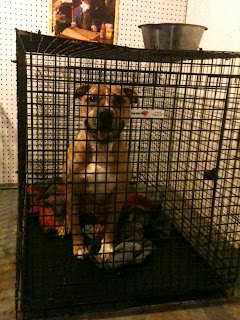 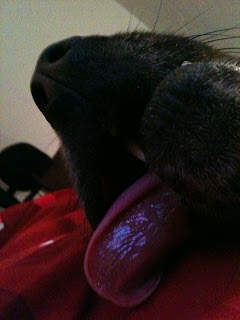 Greta, sound asleep (despite all of her enthusiastic barking, she does indeed rest at times).
Posted by Nicole at 2:25 PM 3 comments:

The browns remain stoic and unaffected in the face of an enthusiastic barkeroni.
Posted by Nicole at 5:06 PM 4 comments: